Punishment for Apostasy and ISLAM

It is extremely unfortunate that there are many people and scholars, including, some Muslims, who believe that the punishment for apostasy in Islam is a death penalty. In some Muslim countries they practise this and punish the apostate with killing.

As I have mentioned above that Islam declares that “There is no compulsion in religion”, it clearly gives the commandment that under no circumstances may force be resorted to for the purpose of converting non-Muslims to Islam. It makes no difference whether non-belief was before or after one’s acceptance of Islam. Compelling a person to believe in Islam and to punish a person for leaving and disbelieving Islam is absolutely forbidden. The non-believers and apostates are free to accept any religion, and there is no punishment in Islam. 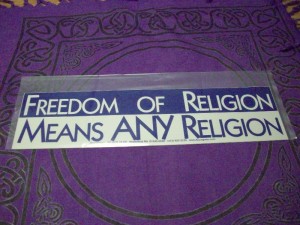 Just ponder over this verse and think that if it had been the punishment of apostasy a death, then how can a person who disbelieved Islam come back into the fold of Islam for the second time? In this verse it is not mentioned once, but for three times, that if a person disbelieves for three times still there is no worldly punishment for him. Not even a lesser punishment is mentioned.

Religion is a matter of choice, and everybody can believe or disbelieve any religion.

The Holy Quran says:
O ye who believe, whoso from among you turns back from his religion let him remember that in place of such a person, Allah will soon bring a people whom He will love and who will love Him, who will be kind and considerate towards the believers and firm and unyielding towards the disbelievers. They will strive hard in the cause of Allah and will not at all take to heart the reproaches of fault finders. That is Allah’s grace; He bestows it upon whosoever He pleases. Allah is the Lord of vast bounty, All-Knowing. (5.55)

Whoso disbelieves in Allah after he has believed — save him who is forced thereto while his heart finds peace in the faith — but such as open their breasts to disbelief, on them is Allah’s wrath; and they shall have a severe punishment. [16:107]

And Muhammad is only a Messenger. Verily, all Messengers have passed away before him. If then he die or be slain, will you turn back on your heels? And he who turns back on his heels shall not harm Allah at all. And Allah will certainly reward the grateful. [3:145]

No corporal punishment can be understood to have been mentioned by any stretch of imagination in these verses of the Holy Quran.

“To conclude, apostasy is the clear repudiation of a faith by a person who formerly held it. Doctrinal differences, however grave, cannot be deemed to be apostasy. The punishment for apostasy lies in the hand of God Almighty, against whom the offence has been committed.” (Murder in the name of Allah, page 92, revised edition 1990)

1 Response to Punishment for Apostasy and ISLAM