To be free from sin 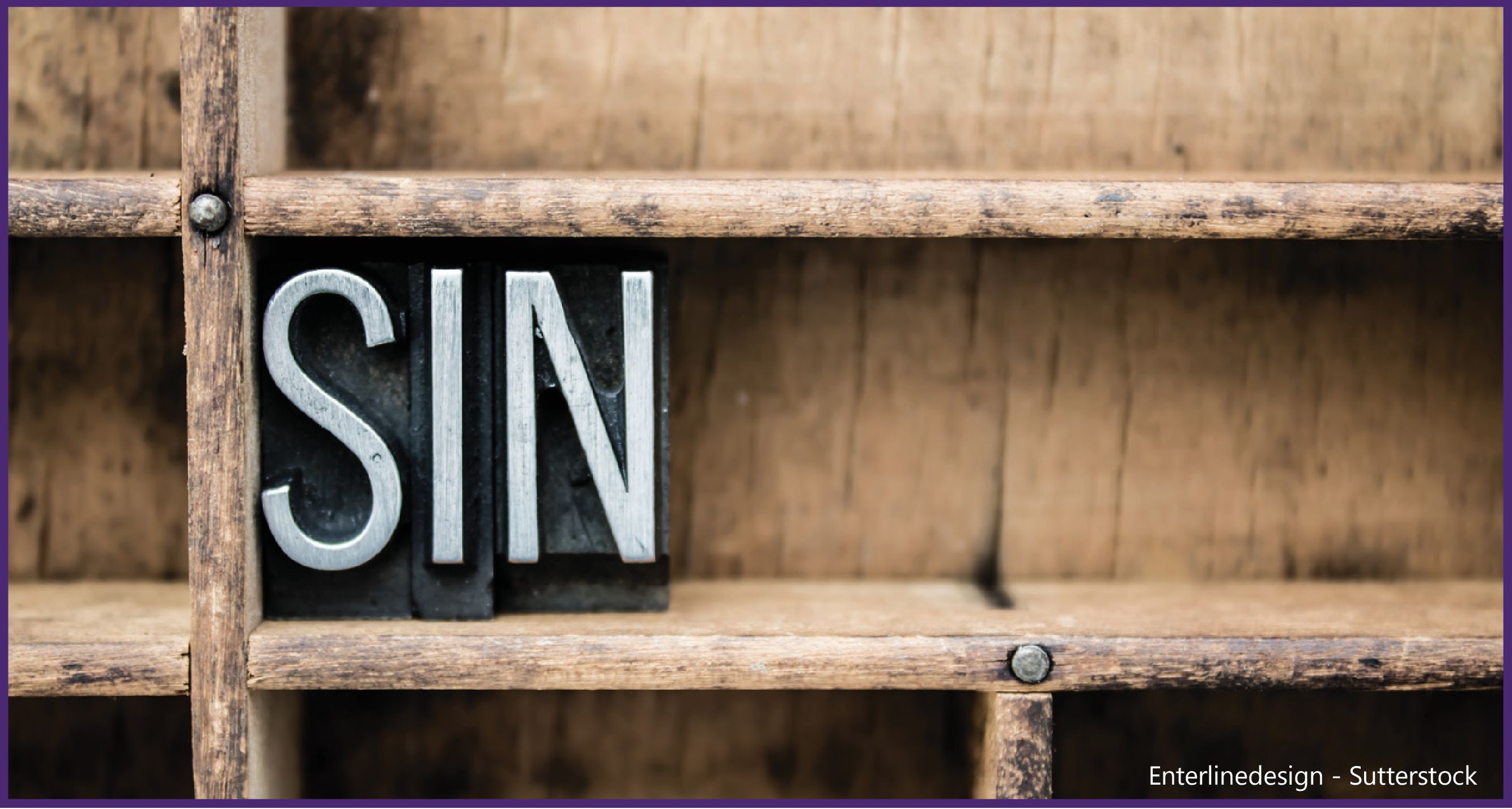 What does solidarity mean? 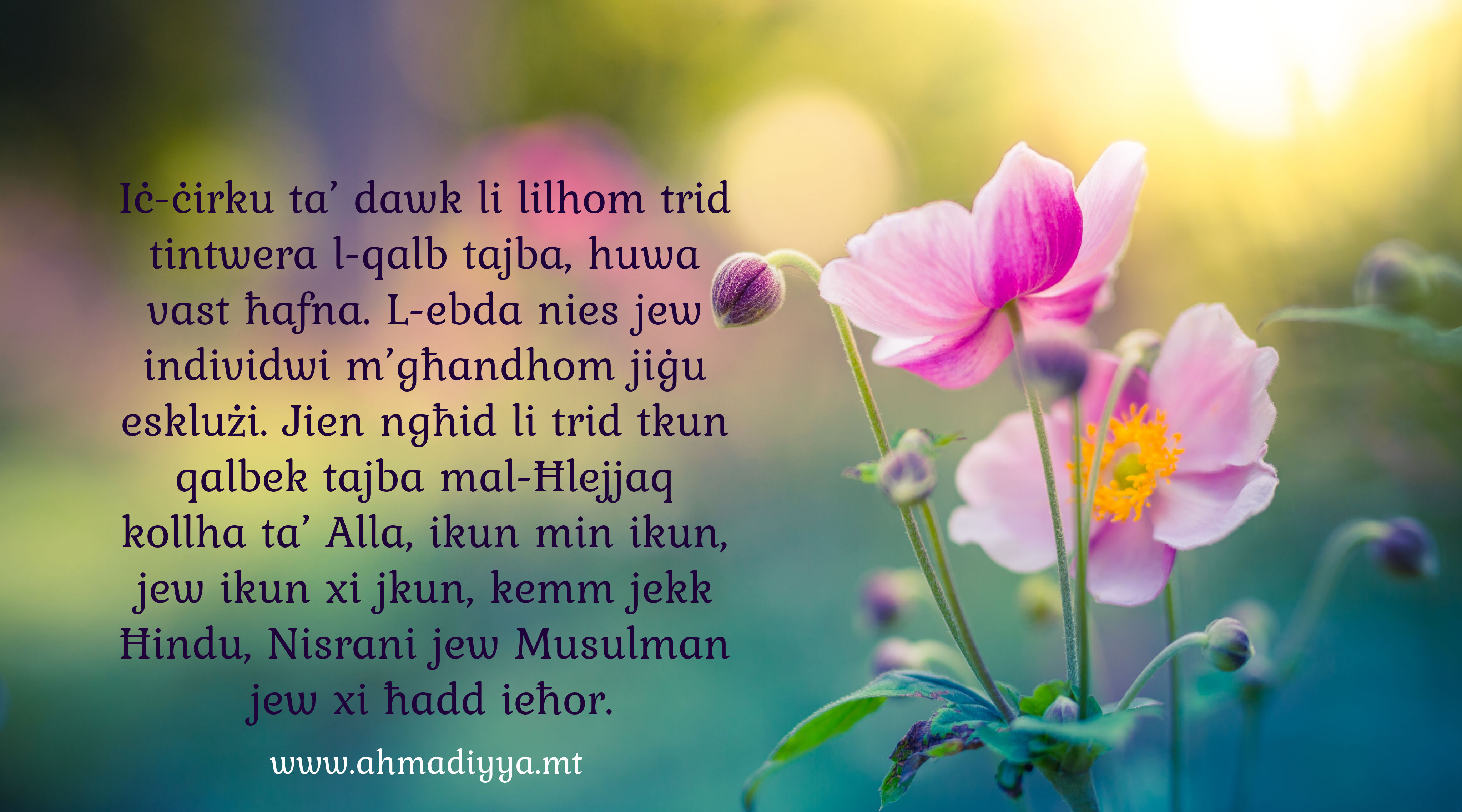 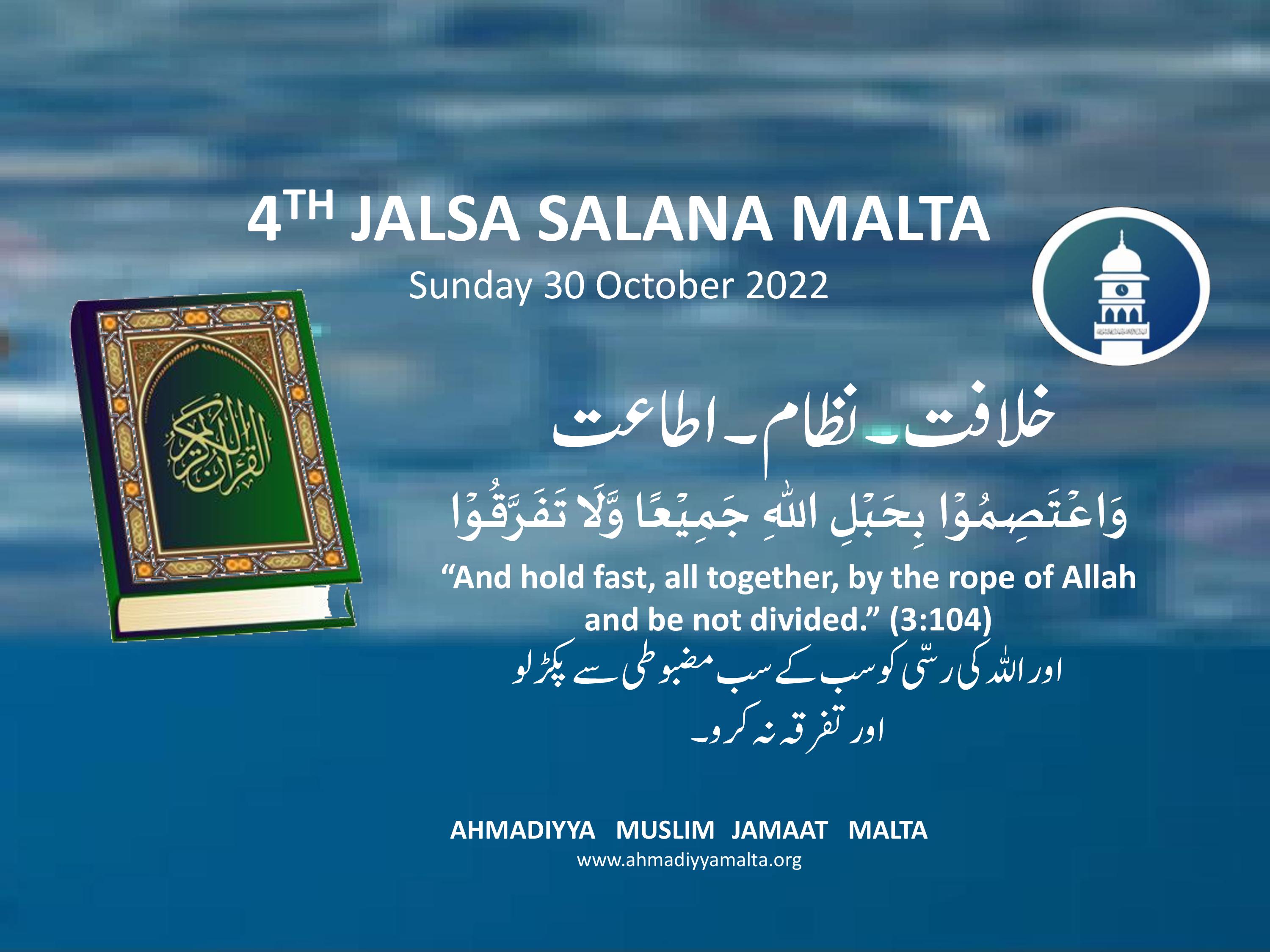 The first session started with the recitation of the Holy Quran by Hafiz Waqas Ahmad Sahib followed by a poem written by the Promised Messiahas, presented by Nasir Mahmud Sahib.

Jamaat-e-Ahmadiyya Malta is so fortunate to receive a special message from Beloved Huzoor, Hazrat Khalifatul Masih Vaa, for the Jalsa Salana Malta 2022, which was read out with an Urdu translation by Imam Laiq Ahmed, President Ahmadiyya Muslim Jamaat Malta.

This was followed by a speech by Nauman Atif Sahib in English on the topic, “Prayer: Our Identity & Hallmark.” The next speech was in Urdu by Rauf Babar Sahib about “The importance & blessings of financial sacrifices.” Then, Kashif Hyder Sahib spoke in English on “Tabligh a collective responsibility”.

Musawar Ahmad Sahib delivered his speech on the topic of “Modern societies and means of training” in Urdu. Nasir Mahmud Sahib and his team read the poem followed by a speech about “The life & character of the Holy Prophet Muhammadsa”, by Muhammad Ahmad Idrees Sahib.

The first session was concluded with a speech by Imam Laiq Ahmed Atif, Sadr Jamaat Ahmadiyya Malta, on the theme of this year’s Jalsa “Khilafat – Nizam – Obedience (خلافت۔ نظام۔ اطاعت)”

By the grace of Almighty Allah, the second session of the Jalsa Salana (Annual Convention) 2022 was held on the theme of “Together for Peace.”

The Ahmadiyya Muslim Community organises its annual convention to increase religious knowledge, enhance spirituality, promote interfaith harmony, universal brotherhood, and to build bridges between people and to spread the message of love, hope and peace; and to join in supplications for the well-being of the society. Explaining the objectives of this convention the Holy Founder of the Ahmadiyya Muslim Jamaat says: “These meetings will lead to progressive strengthening of a bond of mutual love and affection.’’ 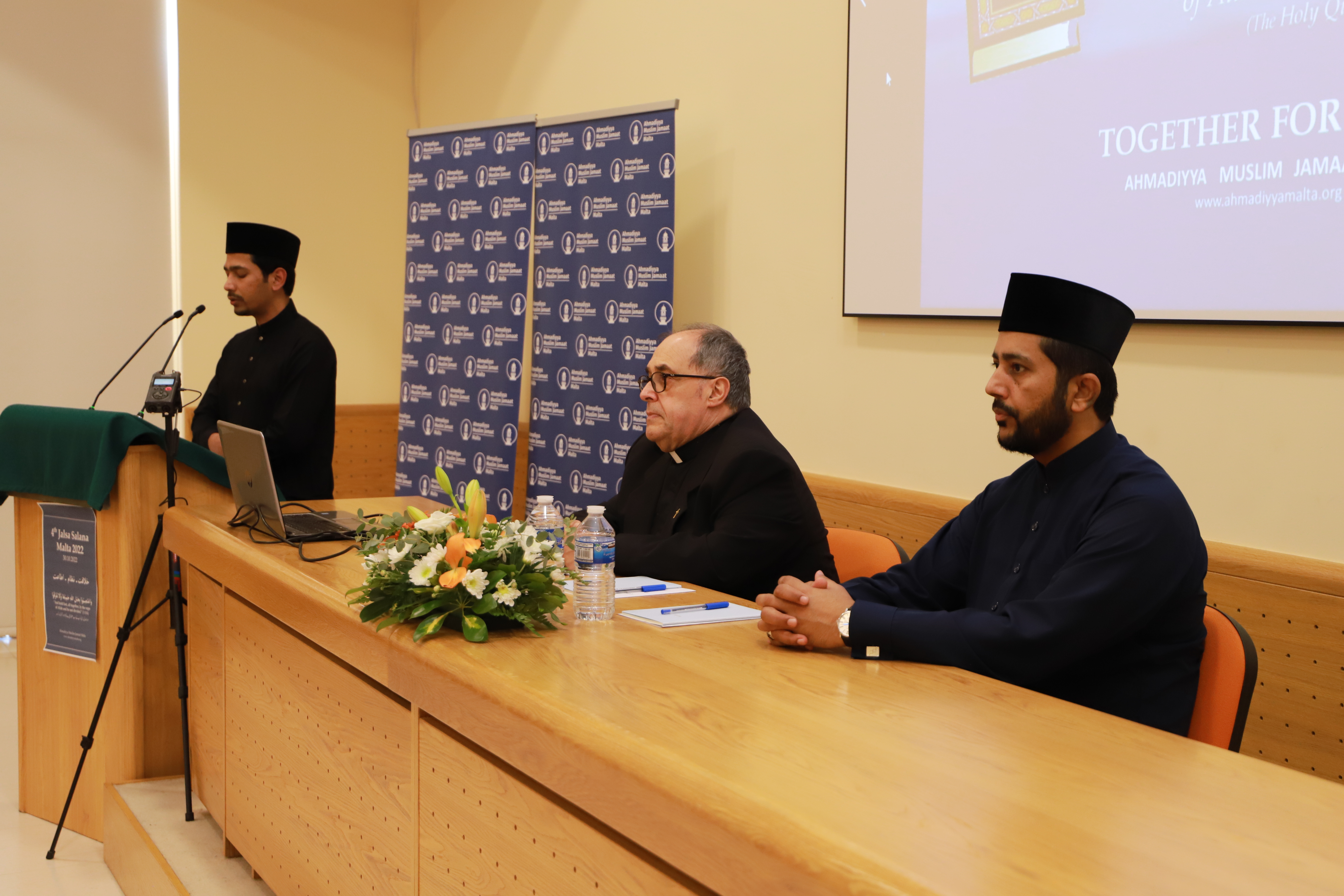 The session started with the recitation of the Holy Quran with English translation by Hafiz Waqas Ahmad; Jaree Ullah Khalid Sahib moderated the session and also highlighted the purpose of the Annual Convention.

Ms. Mary Gauci, President Happy Parenting Malta, highlighted the importance of peace within families and also presented three key words to ponder: me, memory & meaning. Who is me, what legacy I would like to leave and what that legacy would mean? Mr. Bryan Corlett, President Universal Peace Federation Malta, said that if we truly want peace then we must remember that, ‘peace starts with me.’ Ms. Umayma Elamin Amer, President of Migrant Women Association Malta, highlighted the importance of peace building within communities.

Rev. Mgr. Alfred Vella, the Head of Marriage Office Archdiocese of Malta, highlighted the importance of interfaith peace and particularly peace between Muslims and Christians and said that peace is possible.

The concluding speech was delivered by Imam Laiq Ahmed Atif, president of the Ahmadiyya Muslim Jamaat Malta, on the topic of “The Holy Prophet Muhammadsa & World Peace.”

He said, the Holy Prophet Muhammad, peace be on him, gave a simple yet magnificent principle that: ‘Like for others what you like for yourself’.

He explained that, peace is something that the world has always strived for. The true peace is not only external but also of the heart and mind; and the fact is that until there is peace of the heart and soul, external peace has no reality. Outer peace has no value in itself unless it is accompanied by the inner peace. Only that state of peace can be called peace that gives satisfaction both outwardly and inwardly. In fact, the state of peace can ensure harmony and serenity at home, as well as ensuring international harmony and peace.

People desire for peace to be established at every level, however a mere desire cannot bring about peace, for peace to be established concerted efforts, united force with mutual understanding while applying our collective wisdom and understanding are of paramount importance. When we desire peace, then it should not be a selfish desire, but a desire for the entire humanity. There should not be different standards in seeking peace for oneself and for others. If peace is not for the entire world, then it cannot be considered true peace.

He concluded with a passionate and fervent message of His Holiness, Hazrat Mirza Masroor Ahmadaa, the Spiritual Head of the Ahmadiyya Muslim Community, that he delivered to the world, on 8th October 2022, during his recent visit to the United State of America. He said:

“My ardent request and message to the world is that we must set aside our differences and work tirelessly to foster peace in society so that we may save our future generations, rather than, God-forbid, sentencing them to lives filled with nothing except misery and despair. Each of us has a role to play in the cause of peace.

Wherever there is cruelty or injustice, we must condemn it; we must urge our political leaders that instead of propelling our nations towards war and rather than raising the temperature through threats of retribution and violence, they should endeavour to cool the tensions that exist both at an international level and within nations through diplomacy and wisdom. They must ensure that the peace and security of the world remains their paramount objective. 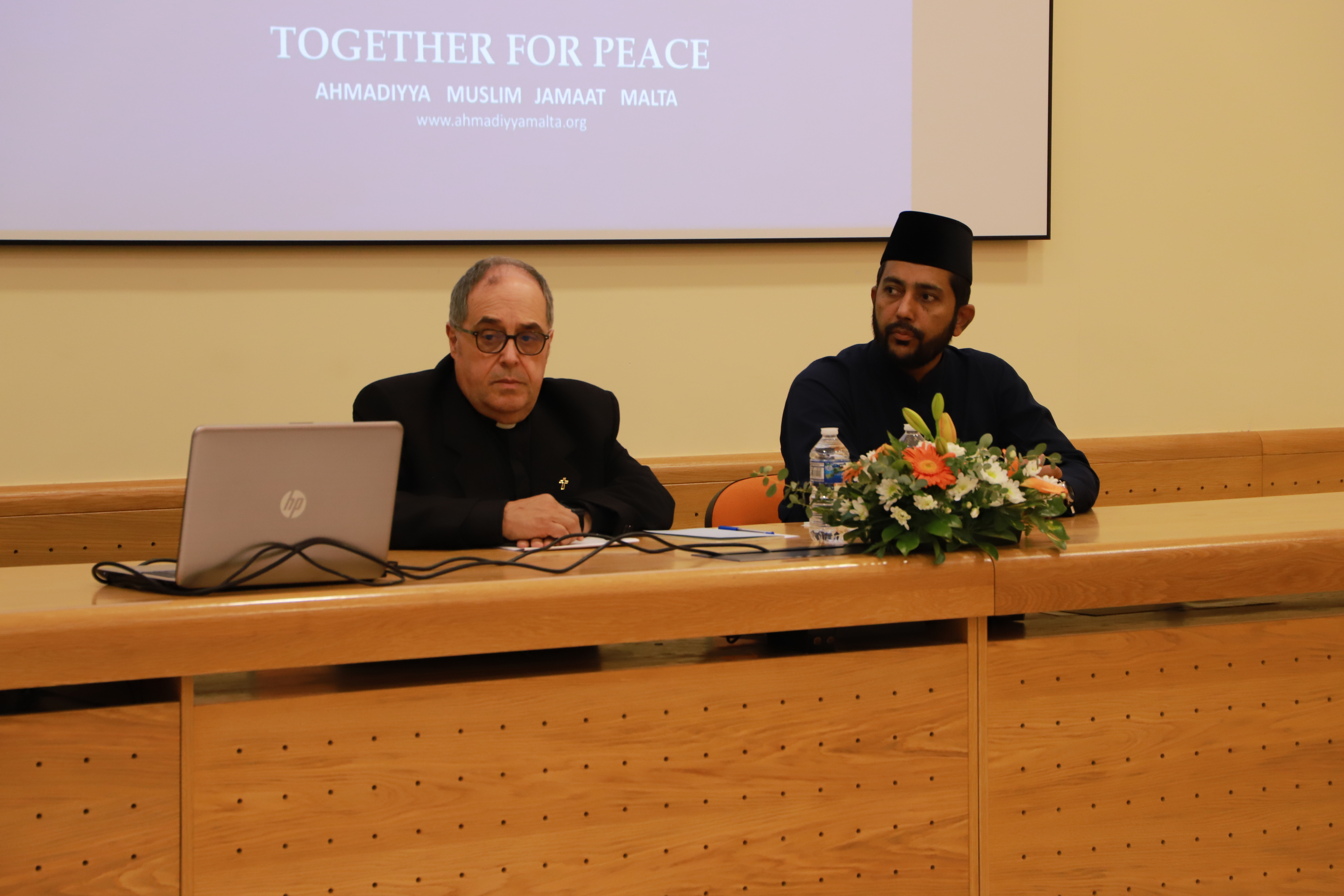 In this effort for peace, Muslims, Christians, Jews, Hindus, Sikhs should play their role. Those who do not believe in God or subscribe to any faith play their role. Rather than isolating ourselves and being fearful of one another, we must come together for the sake of humanity. Religious people should ardently pray according to their respective ways, seeking God’s help and mercy for true and lasting peace in the world to emerge.

From the depth of my heart, I pray that the world is saved from all forms of destruction and devastation. I pray that the long shadows of war and bloodshed that hover above us give way to everlasting blue skies of peace and security. May God Almighty have mercy upon the world.” Ameen

People from different walks of life attended this convention. After the speeches traditional food was served and participants had more time to interact with each other. AlHakam – Alfazl 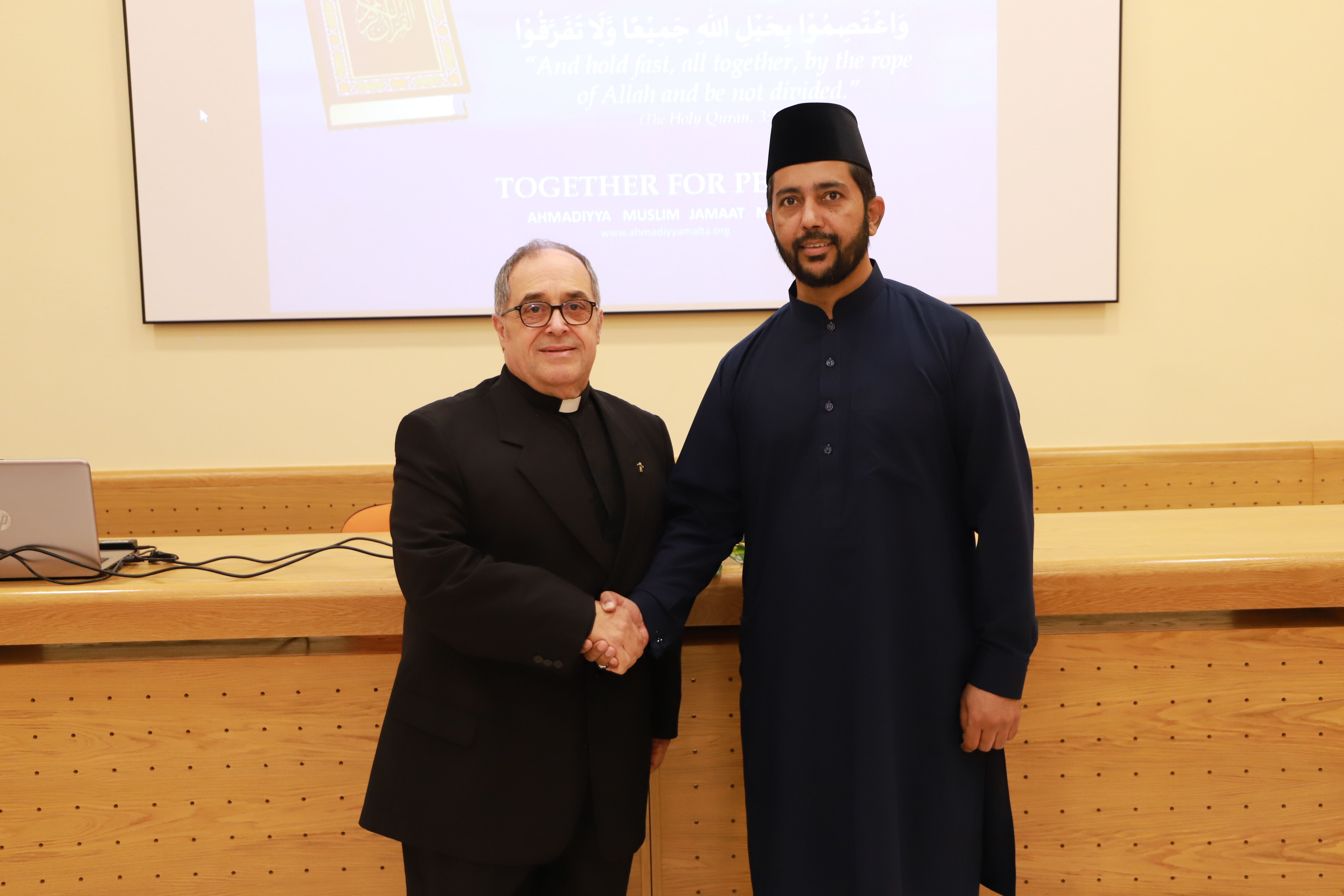 The desire for peace 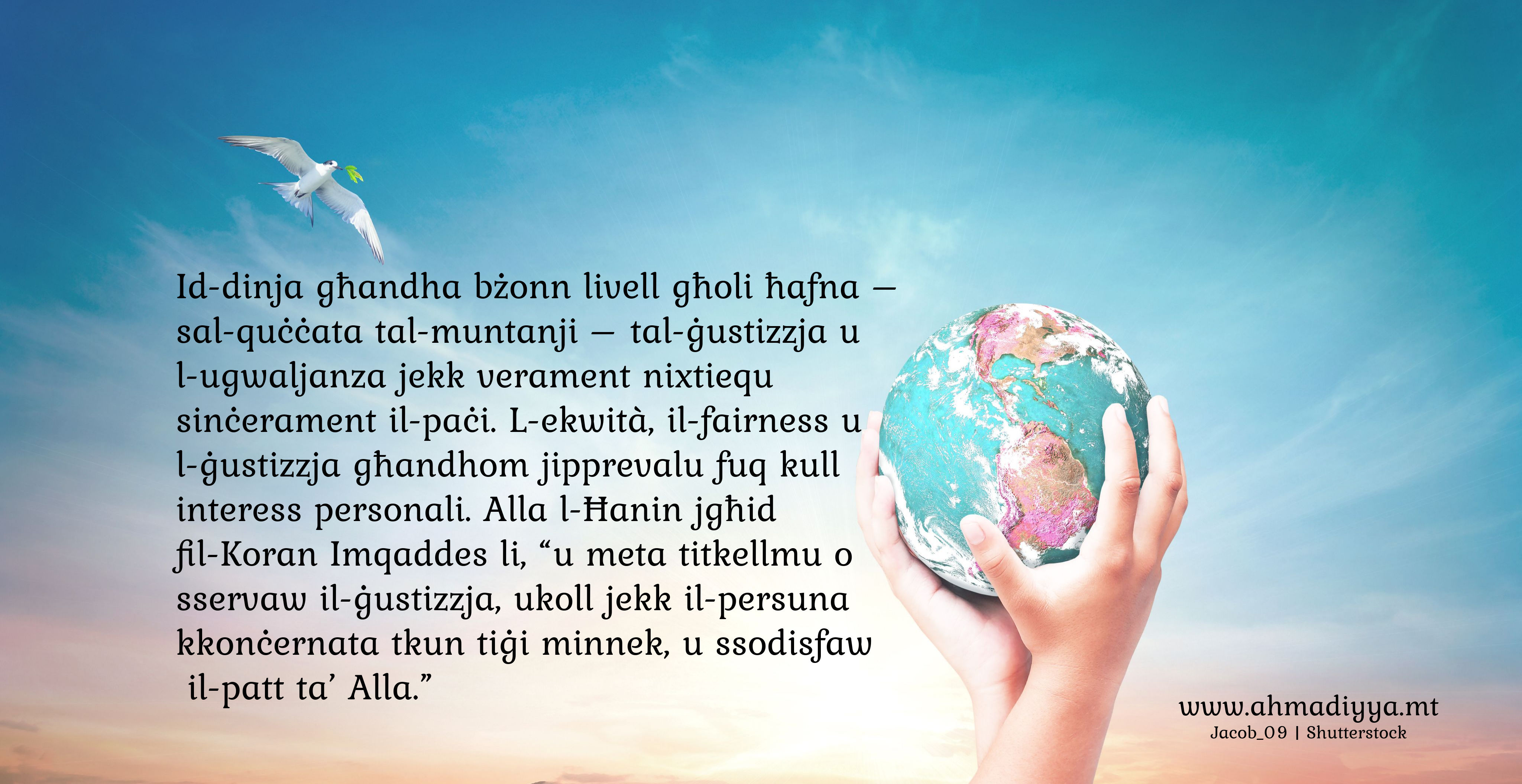