Love for all, hatred for none 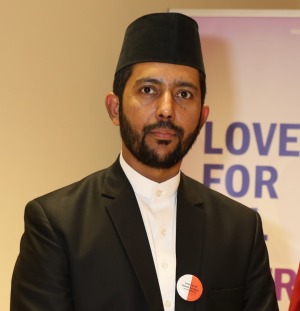 Jeremy Micallef talks to Laiq Ahmed Atif, President of Ahmadiyya Muslim Jamaat Malta, about how the Community aims to break down barriers; builds bridges between people; and give us a true understanding of God and humanity. (Source/Credit: The Malta Independent on Sunday, 30 December 2018)

What can you tell me about Ahmadiyya Muslim Jamaat Malta’s slogan?

We believe that our slogan ‘Love for All, Hatred for None’ is a code for peace; a code to build a peaceful society, to build harmonious societies and, indeed, to build a very peaceful, prosperous and harmonious world.

Because it has all the ingredients: it is not the slogan of a particular community or religion, it is a slogan for all humanity. It caters to every single human being.

There is no distinction or discrimination towards anyone.

We believe that this slogan which was given to the community by our 3rd Caliph, can unite the entire world. In the beginning, we thought that it was a slogan – but it is such a profound phrase. In fact, it’s so profound in its meaning and philosophy that if all the world just abided by this one slogan, we are pretty sure that the world would become a haven of peace and harmony.

This means that all human beings are equal, valuable: every soul is important.

Then it comes to how a person puts his words into actions. A person’s actions differ and can also elevate or reduce his status, which is why their actions make people good or bad.

We should deal with each other with respect and reverence, and that will lead to love and compassion.

How does this tie in with Islam?

We believe that this slogan is the essence of the entire Quranic teachings.

If a person reads the entre Quran, he will learn two things: a love of God and a love of humanity. The slogan caters for all that very well.

Also, when we say ‘love for all’, we show the world that Islam is not an extremist fundamentalist religion but a religion that promotes peace, love and brotherhood.

So through this slogan we break those barriers, and any misunderstandings, misconceptions, or taboos in people’s minds. People then come together and start getting to know each other, rather than living at a distance, and this leads us to better equip ourselves with an understanding of each other.

That is what the founder of the Ahmadiyya Muslim Community also said: “I do not think I have any enemies. I have love for everyone in the world. I also command my members that they must help extinguish a fire that is burning the house of a Hindu. If a member of my community does not do so, then he does not belong to me.”

He also said:  “If a member of my community does not save the life of a Christian being attacked then, for sure, this person does not belong to me.”

He meant that the love of humanity must be so profound that when a person is in need, we should not see who he is, his background, his colour, or his religion – it must be beyond that kind of thinking.

In Ahmadiyya Muslim Community, one of the humanitarian organisations is named ‘Humanity First’. Note that we did not say ‘Religion First’, ‘Muslims First’ or ‘Christians First’, but ‘Humanity First’ –  meaning that if a human being is in need, then we must look on him under the gaze of humanity. We even help those who do not believe in God, as they are still a person and a human being.

That is the uniqueness in the slogan – that we should look at each and every individual as a human being, irrespective of their differences.

I am part of the Ahmadiyya Muslim Community because it caters for all my spiritual needs. It has all the ingredients for my well-being – how I can prosper in my spirituality and my everyday life.

As a community, we also organise inter-faith dialogue discussions, gatherings and conventions to show that diverse opinions and faiths can be united: that we can work for the common good together.

That is what I have understood through the Ahmadiyya Muslim Community.

This is because the Prophet Muhammed prophesied that, in the later days, a reformer would come who would reform the Islamic teachings, giving a true and accurate interpretation according to the needs of the time.

We believe that the founder of Ahmadiyya Muslim Community is that person – the one who was prophesied by the Prophet Muhammed.

That is why the understanding of Islam which we have through our founder, and then our spiritual leaders caliphs, is unique. We always find guidance from them whenever a moment of crisis or difficulty occurs.

What would a good example of that be?

A good example would be that of terrorism. Our leadership has taught us the true understanding of Islamic Jihad, because many times it is misinterpreted and takes the shape of terrorism and extremism.

Jihad is not to kill a person, but to kill our ego; our inner-self which always incites us towards evil.  Jihad is to save lives, not to destroy lives: to save lives and to provide basic necessities so that they could survive – that is the biggest challenge in today’s world.