The Calamity of Damascus! 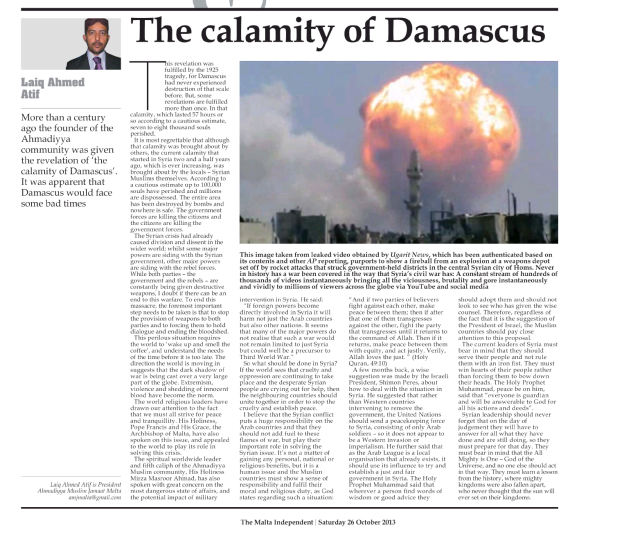 More than a century ago the Founder of the Ahmadiyya Community was given the revelation of ‘the Calamity of Damascus’. It was apparent that Damascus would face some bad times. This revelation was fulfilled by the 1925 tragedy, for Damascus had never experienced destruction of that scale before. But, some revelations are fulfilled more than once. In that calamity, which lasted 57 hours or so according to a cautious estimate seven to eight thousand souls perished.

It is most regrettable that although that calamity was brought about by others, the current calamity that started in Syria two and a half years ago, which is ever increasing, was brought about by the locals – Syrian Muslims themselves. According to cautious estimate up to 100,000 souls have perished and millions are dispossessed. The entire area has been destroyed by bombs and nowhere is safe. The government forces are killing the citizens and the citizens are killing the government forces.

The Syrian crisis had already caused division and dissent in the wider world; whilst some major powers are siding with the Syrian government; other major powers are siding with the rebel forces. While both parties – the government and the rebels – are constantly being given destructive weapons, I doubt if there can be an end to this warfare. To end this massacre, the foremost important step needs to be taken is that to stop the provision of weapons to both parties and to forcing them to hold dialogue and ending the bloodshed.

This perilous situation requires the world to ‘wake up and smell the coffee’, and understand the needs of the time before it is too late. The direction the world is moving in suggests that the dark shadow of war is being cast over a very large part of the globe. Extremism, violence and shedding of innocent blood have become the norm.

The world religious leaders have drawn our attention to the fact that we must all strive for peace and tranquility. His Holiness, Pope Francis and His Grace, the Archbishop of Malta have also spoken on this issue, and appealed to the world to play its role in solving this crisis.

The Spiritual Worldwide leader and Fifth Caliph of the Ahmadiyya Muslim Community, His Holiness, Mirza Masroor Ahmad has also spoken with great concern on the most dangerous state of affairs, and the potential impact of military intervention in Syria. He said:

“If foreign powers become directly involved in Syria it will harm not just the Arab countries but also other nations. It seems that many of the major powers do not realise that such a war would not remain limited to just Syria but could well be a precursor to Third World War.”

So what should be done in Syria? If the world sees that cruelty and oppression are continuing to take place and the desperate Syrian people are crying out for help, then the neighbouring countries should unite together in order to stop the cruelty and establish peace.

I believe that the Syrian conflict puts a huge responsibility on the Arab countries and that they should not add fuel to these flames of war, but play their important role in solving the Syrian issue. It’s not a matter of gaining any personal, national or religious benefits, but it is a human issue and the Muslim countries must show a sense of responsibility and fulfil their moral and religious duty, as God states regarding such a situation: “And if two parties of believers fight against each other, make peace between them; then if after that one of them transgresses against the other, fight the party that transgresses until it returns to the command of Allah. Then if it returns, make peace between them with equity, and act justly. Verily, Allah loves the just. ” (Holy Quran, 49:10)

A few months back, a wise suggestion was made by the Israeli President, Shimon Peres, about how to deal with the situation in Syria. He suggested that rather than Western countries intervening to remove the Government, the United Nations should send a peacekeeping force to Syria, consisting of only Arab soldiers – so it does not appear to be a Western invasion or imperialism. He further said that as the Arab League is a local organisation that already exists, it should use its influence to try and establish a just and fair government in Syria. The Holy Prophet Muhammad said that wherever a person find words of wisdom or good advice they should adopt them and should not look to see who has given the wise counsel. Therefore, regardless of the fact that it is the suggestion of the President of Israel, the Muslim countries should pay close attention to this proposal.

The current leaders of Syrian nation must bear in mind that they should serve their people and not rule them with an iron fist. They must win hearts of their people rather than forcing them to bow down their heads. The Holy Prophet Muhammad, peace be on him, said that “everyone is guardian and will be answerable to God for all his actions and deeds”.

Syrian leadership should never forget that on the day of judgement they will have to answer for all what they have done and are still doing, so they must prepare for that day. They must bear in mind that the All Mighty is One – God of the Universe, and no one else should act in that way. They must learn a lesson from the history, where mighty kingdoms were also fallen apart, who never thought that the sun will ever set on their kingdoms.

Download pdf file of this article: The Calamity of Damascus

2 Responses to The Calamity of Damascus!