9/11 and Islam: Islam unreservedly condemns every form of terrorism 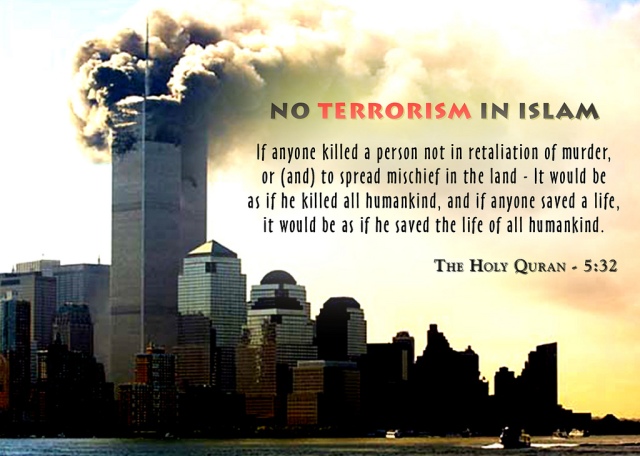 Today the world is facing great threats of terrorism. Thousands of innocent people have been killed and still there seems to be no end to this cruelty. Some blame Islam as a religion of grave terror and bloodshed. But, in reality, there is no connection between Islam and terrorism at all; Islam is as closely related to terrorism as light is to darkness or life is to death or peace is to war. Islam very strongly condemns terrorism and encourages establishing peace and order in the land.

However, one cannot deny that on many occasions some Muslims are found involved in terrorist activities either individually, on behalf of a group or on behalf of a country with a predominately Muslim population.

But let it be very clear that we do not justify terrorism of any kind whatsoever, whatever the colour, religion, sentiment or objective the terrorist may claim to represent. Islam does not approve of disorder in any form. Islam does far from teach terrorism. It teaches rule of law, obedience to the authorities and does not let anyone take the law into his own hands. The Holy Quran states:

“O ye who believe! Obey Allah, and obey His Messenger and those who are in authority over you.’ (Ch.4: V.60)

The words, those in authority, in their wider significance include even such non-Muslims as may happen to be in authority over Muslims.

The practice of the Holy Prophet as well as his sayings make it clear that in secular matters Muslims should obey even such of their rulers as are not Muslims. And if some people say that it is not necessary for a Muslim to follow any non-Islamic government, this is utterly false and against Islamic teachings as mentioned above.

The Holy Quran further states that “those who create disorder in the earth, they are the real losers”; “and commit not iniquity in the earth, creating disorder”; “and Allah loves not disorder”. Such words and phrases are found in the Holy Quran repeatedly.

After this clear teaching such terrorist actions of some Muslim individuals or groups have no cover or justification at all, and they must be condemned widely. And those who are involved must be brought in front of justice.

As far as Islam is concerned, it categorically rejects and condemns every form of terrorism. It does not provide any cover or justification for any act of violence, be it committed by an individual, a group or a government.

The Ahmadiyya Muslim Community, which is a peace loving and law abiding community, strongly condemns all acts of terrorism anywhere in the world. The Ahmadiyya Community very boldly and loudly, without any fear, speaks against terrorism. We also call on all Muslims in the world to join us in condemning all actions of violence and terror caused or carried out by anyone whoever he or she may be. We call on all of them to boldly claim and express with their tongue and action that they are loyal and law-abiding and obedient citizens, and join us in spreading a message of peace, love, harmony, tolerance and brotherhood.

We reject and condemn all acts and forms of violence and terrorism unreservedly and totally, because it is our deeply rooted belief that not only Islam but also no true religion, whatever its name, can sanction violence and the bloodshed of innocent men, women and children in the name of God.

God is love, God is peace!