During the Symposium the Community also organised an exhibition about the holy books of different religions, including the Holy Bible and the Holy Koran, at the same venue.

Audience also put their questions to the speakers, and presented their comments. Nearly 70 people, from different sections of the society attended this Peace Symposium and Holy Books Exhibition.

In his welcoming address Laiq Ahmed Atif, President Ahmadiyya Muslim Jamaat Malta, introduced to the gathering about the Ahmadiyya Muslim Jamaat and explained that the Ahmadiyya Community organises similar meetings all around the world. The aim of these gatherings is to share knowledge, teachings, opinions and experiences on different subjects that can be helpful for the establishment of lasting peace in the world.

He concluded it with the following two quotations from the keynote addresses of His Holiness Hadhrat Mirza Masroor Ahmad, the Head of the Worldwide Ahmadiyya Community:

“Peace in society is a two-way process and can only be established if all parties work together towards mutual reconciliation.

Today we, the Ahmadiyya Muslim Jamaat, are trying to bring peace in the world. We are playing our role and trying to fulfil our responsibilities in this regard. And so I would request all of you to join us in this task…

We must set aside our own personal desires and instead be concerned for the future existence and well-being of our next generations. We must adopt selflessness rather than selfishness. When we all join together and come to respect each other’s feelings and sentiments then and only then will an atmosphere of mutual love develop. It is then that we will truly see the beautiful society that all peaceful people desire.” (Opening of Tahir Mosque in Catford, London, on 11 February 2012) 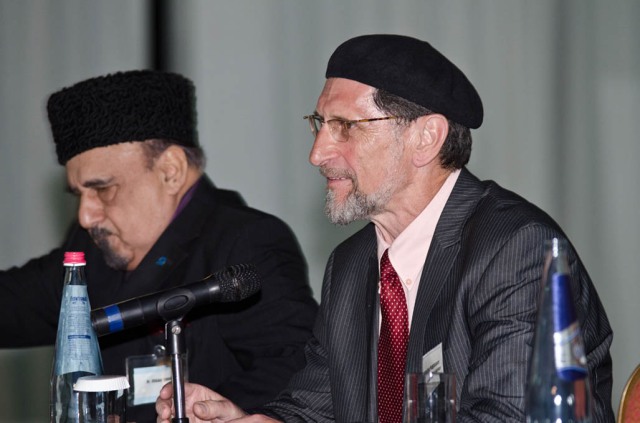 Highlighting the importance of peace he further said:

“It is surely our duty to care for and respect one another. And the best way to practically demonstrate this esteem is to consider the feelings and sentiments of each other, because that is the primary way to establish good human values. And, it is the only way to develop an environment filled with peace, justice, reconciliation and brotherhood. It should be our goal to establish such high values in every village, every town, every city, every country, every society and indeed every part of the world.” (Opening of Baitul Aman Mosque in Middlesex, UK, 4th March 2012)