Respecting the feel­ings and sentiments of each other is a noble virtue. The basic ethics, morals, principles and decency are the assets of human beings. And every religion of the world – be it Islam, Christianity, Hinduism, or Judaism – they all teach, promote and highly recommend these noble virtues and ethics.

These values guarantee the promotion of love, harmony, tolerance, respect and brotherhood in the society, which will ultimately result in a serene, tranquil, secure and peaceful environment.

Every heart is inclined towards good and every good-natured person wants peace established in the world. And when we analyse and examine the current situation in the world we find that many are restless in attaining this objective of peace. Yet, we keep seeing certain individuals, organisations and powers engaged in destroying peace and spreading spite, animosity and malice, building walls and fences of hatred. And sometimes they even target and challenge the prophets of God and founders of religions. History of mankind is full of such people who have adopted a brazen attitude towards the messengers of God and holy personages of the world’s faiths.

Recently, certain elements using the slogans of liberty and freedom of speech have made a foul, provocative and false film about the Prophet Muhammad.

As a result of this, there has been a violent reaction among various organisations and countries. To vent their anger and displeasure, they have resorted to furious protests, often leading to arson and destruction of private and public property.

There were also attacks on foreign embassies and their staff, and in Libya the American ambassador together with three other staff members were killed.

I believe that killing, burning flags, creating general turmoil, or going on strike is not an acceptable way to protest. Like many other world religions, Islam also extremely discourages such actions.

We strongly condemn any reactions which create disorder and destroy peace. This reaction shows no respect to the Holy Prophet Muhammad. On the contrary, it goes completely against his teachings and practices.

The Ahmadiyya Muslim Jamaat strongly condemns the making of the extremely contemptible, provocative, and blasphemous film about the Holy Prophet Muhammad.

We believe that free speech is a valuable right – but not at the cost of the much higher value of, and right to life. We appeal for mutual respect, honour and dignity and to establish the true sense of respect and honour for all the prophets and founders of religions.

Let me make it clear that Islam does not prescribe any punishment for blasphemy in this world nor vests such authority in anyone. There is not a single verse in the Holy Koran or a single example from the practices of the Prophet Muhammad, for the punishment of blasphemy. 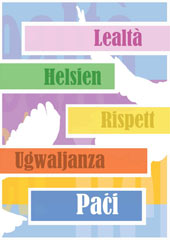 Islam teaches its followers to be kind, respectful to others and must take care of the feelings and sentiments of the people of other faiths. It strongly discourages indecent behaviour and indecent talk, or hurting the sensitivity of others. Muslims are required to remember they should abstain from any actions that may cause others to feel hurt. And they should never compromise the peace of the world.

As far as Islam is concerned, it sets a fundamental article of faith and that is to believe in all the prophets and messengers of God, without exception, and they are required that they should make no distinction between them by accepting some and rejecting others.

I will conclude by quoting the founder of our community who summarised the Islamic belief of paying great respect and honour to all the messengers, prophets and founders of different religions:

“One of the principles which forms the basis of my belief refers to the established religions of the world. These religions have met with wide acceptance in various regions of the earth. They have acquired a measure of age, and have reached a stage of maturity. God has informed me that none of these religions were false at their source and none of the prophets impostors.

“This is a beautiful principle, which promotes peace and harmony, and which lays the foundation for reconciliation, and which helps the moral condition of man. All prophets that have appeared in the world, regardless of whether they dwelt in India or Persia or China, or in some other country, we believe in the truth of them, one and all.”

Read Original Article in The Times: