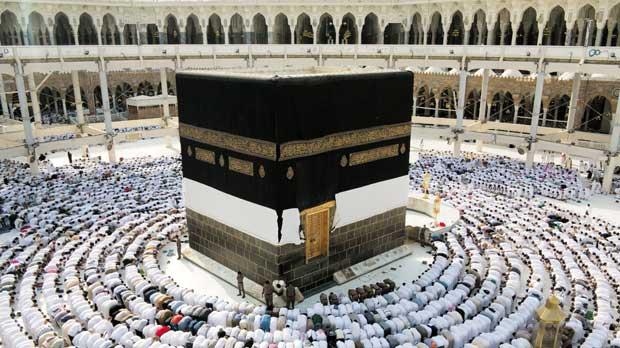 If we look at the current state of affairs of the world we find thatit is passing through turbulent times, be it political or social unrest, economic hardship, the ravages of some disease, man-made or natural disasters, tragic incidents – there is much hardship and sorrow in the world today.

Similarly, when analysing the situation in the Muslim world, we find that the majority of the Muslim countries are facing grave difficulties due to increasing conflict and division.

In fact, some Muslim majority countries stand on the brink of complete destruction. Their leaders and politicians neither act with justice nor with the fear of God in their hearts, while some members of the public are expressing love for their nations in a harmful way.

As a result of such division, violence and aggression has increased hugely in the recent past. In the Muslim world there are many organisations whose wrong acts defame Allah, His Prophet and the religion of Islam.

Their wrongdoings, extremist ideology and terrorist acts have made the entire world very cautious and concerned.

Because of the escalating extremism and violence around the world and specifically in the Muslim world, voices about the reformation of Islam are being heard from many corridors and from different corners of the world.

Many people in the developed world consider religion to be the primary cause of world disorder, however this is due to a misunderstanding of religion itself. The disorder and injustice we see around the world is not as a result of religion, rather it is being perpetrated by self-interest and greed. It is a result of people misusing the name of God to fulfil their vested interests, and it is also a result of the denial of the very existence of God.

History bears witness to the fact that Islam itself was a great movement of re-formation and prosperity in society. The holy founder of Islam, throughout his life, led a great movement of reformation where uneducated and uncivilised people of Arabia became righteous, God-fearing people and servants of humanity.

The Islamic teachings are equally practicable today as these were in the time of their revelation; the difference lies with those who interpret it wrongly and misquote these teachings for their personal interests and agendas. It is not the fault of the teachings, but of those who are not ready to understand the philosophy of the Islamic teachings and misuse this God-given guidance.

In brief, the Muslims have deviated from the true understanding of Islamic teachings. It is Muslims who have to understand what it means to be a true Muslim.

According to the teachings of the Holy Quran, the love that a Muslim must adopt for humanity should be such that he or she should become restless upon seeing any other person in discomfort. A true Muslim must always be watchful of the sentiments of others and must sacrifice his own comfort for the sake of the comfort of his fellow beings.

Muslims are those who live peacefully with one another.

The Prophet Muhammad said: “A Muslim is the one from whose hands and tongue every peaceful human being is safe.”

The Holy Quran declares that “disorder and persecution is worse than killing” (2:192), “and God does not like disorder” (2:206). Islam establishes the sanctity of human life and declares that killing one is to kill all mankind (5:33), defines “villainy in the land” not as political warfare, but religious persecution (22:40-41),and instructs Muslims to remain law-abiding citizens and always obey the authorities (4:60).

The separation of religion and state (4:60) and the democratic system of government is preferred and highly commended by Islam (42:39). The Prophet Muhammad said: “The leader of a country is the servant of that nation.”

These few references are clear evidence that Islam is a reformed, practicable and comprehensive religion.

I believe that it is Muslims, not Islam, who need reformation.

The question that arises is that if Islam is a comprehensive religion, then why is there so much violence and unrest in the Muslim world?

The simple answer to this question is that Islamic teachings are not being practised according to their spirit. The leaders have misinterpreted the teachings and misguided their people for their personal and worldly interests.

The erroneous interpretation of Jihad and raising sword against non-Muslims, or even against those Muslims who may not agree to their thought and interpretation, has also engulfed the Muslim world with violence, aggression, intolerance, extremism and terrorism.

Such scenario was foretold by the Prophet Muhammad and he clearly mentioned the malpractices of the leaders of the later days.

The Ahmadiyya Muslim Community believes and practises Islamic teachings according to their pristine purity and originality, and categorically rejects terrorism and extremism in any form and for any reason, whatsoever.

Over a century ago, the founder of the Ahmadiyya Community emphatically declared that an aggressive “jihad by the sword” has no place in Islam.

Islam believes in moderation, peace, security, tolerance, mutual respect, service to humanity and love for all and hatred for none.

They must bring a significant change from cultures of violence, aggression and killing to cultures of tolerance, serenity and peace; and become like those “from whom hands and tongue every peaceful human being is safe”. Find original post in The Times