A vision of peace and unity! 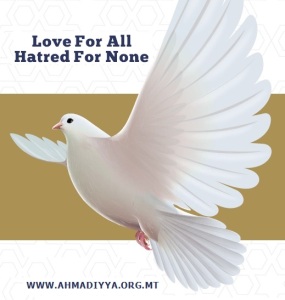 By the sheer grace and blessings of God, in a few days, another year will dawn upon us. At the beginning of every year, millions of people wish one another a happy and a prosperous new year. I think mutual new year greetings would only be beneficial when we all reflect to see how much of our obligations we fulfilled last year and how much we will try to do in the new year.

Moreover, millions will make resolutions to give up certain habits and others may have made an oath of adopting better habits. Some will have done both. Nonetheless both these choices we make mean that we pledge to be better human beings, morally and spiritually.

At the wider spectrum people hope and pray for a better world than it is today. People, societies, nations and countries pledge to remain united for the common good of the entire mankind.

However, the question is how to achieve this goal?

I firmly believe that by adopting this principle the world can put an end to all the injustices, inequalities, killings and acts of extremism. This doctrine alone can lead us towards unity and peace.

In today’s multi-religious and multi-cultural world, showing respect and caring for the sentiments of each other is very crucial and vital. Expressing respect and showing sensitivity to others’ feelings is a remedy for the shattered world and growing disorder in the land. Love is the antidote for hatred.

Moreover, during this festive season, sharing the moments of happiness with each other, with people of different faiths, creeds and cultures, will also build bridges between people.

To create an atmosphere of love and peace in international relations, and creating a tolerant and harmonious world – a world void of religious or political conflicts and full of peace, prosperity and brotherhood, the Holy Quran exhorts us:

The false sense of superiority creates divisions and conflicts. By removing the basic causes of disharmony and disagreement among people, this verse has laid the foundation of a firm and solid brotherhood.

That is the basic principle in promoting a relationship between different people and faiths: do not utter anything that is hurtful to others even in a lighter vein; not to speak of using the entire medium to erect walls of hatred.

I present one example to illustrate how important and invaluable it is to respect religious sentiments of each other. Once, during his lifetime of Prophet Muhammad, a Muslim and a Jew were involved in an argument. Both claimed and counter-claimed the relative superiority of their respective prophets. It appears the Muslim contender may have made his claim in a manner which wounded the susceptibilities of the Jew as he approached the Prophet Muhammad and lodged a complaint against the Muslim. Upon hearing the complaint, the Prophet Muhammad admonished against being unmindful of the sentiments of others and said: ‘Do not exalt me above Moses’.

Furthermore, once a Christian delegation from the city of Najran came to Medina to have dialogue with the Prophet Muhammad. At the time of their prayer the Prophet Muhammad, permitted them to offer their worship according to their own manners inside his mosque.

I believe with such wonderful gestures we can build very solid and long lasting bridges in our societies.

The cooperation between people and nations on the common grounds is another significant principle for the establishment of peace and unity. The Holy Quran highlights this point and says: “And help one another in righteousness and piety; but help not one another in sin and transgression.”

Today we are living in a global village where countries and nations are inter-linked and mutual cooperation is crucial. The truth is that in the modern world we all depend upon one another. So, this cooperation should base on justice, equality and fairness. There should be cooperation to make advancements in science, to excel in other fields of expertise, in education, in health etc. So, by learning from each other’s experiences and mutual cooperation for the common good we create a world of peace and unity.

In the contemporary times the world needs peace, unity and brotherhood. It is time to truly practice the message of the Jesus Christ that ”blessed are the peacemakers.” It is time to become like, as the Holy Prophet Muhammad said that “true Muslim is the one from whose hands and tongue all other people are safe.”

It is my heartfelt and fervent desire and prayer for all people to live peacefully and happily. May the Almighty God make the new year very peaceful, healthy and prosperous for the entire mankind. Amen. [Read original article]